Master of Magic is a turn based strategy game from twenty years ago. You play as a magician seeking to dominate the world of Arcanus and its dark counterpart, Myrror.

You start small and aim to conquer all by building colonies, destroying rival magicians and absorbing their towns and cities into your empire. You’ll come across different races: on Arcanus there’s Nomads, Halflings, High Men, Orcs and more; Myrror has its own unique races such as Trolls, Dark Elves and Dwarves. Each race has different unique units; Halflings for example have Slingers, High Men have Paladins, Dwarves have Hammerhands and so on.

When you choose your wizard at the start of the game, you get to choose how he / she will develop including in which magic realm to specialise. There are five magic realms: Chaos, Life, Death, Sorcery and Nature magic. Your selection determines what tomes of magic you begin with. As the game develops these are filled by the spells you research or discover.

Research Spells: Raven – at the moment researching the Spell of Mastery

As is the case with most turn based strategy games, the world is hidden by a shroud. As you explore, the map tiles are revealed. There are lairs, ruins, towers and nodes to keep you occupied. 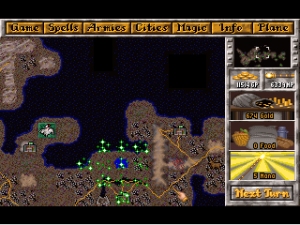 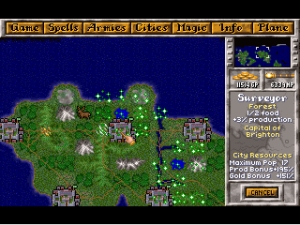 The surveyor shows details of the map tile under the hand pointer.

These generally contain loot such as gold, mana crystals (which go into your magic reserve), artefacts and other more exotic items. Usually these are guarded. Be warned, if you elect to not explore a lair, at some point the monsters guarding it may still go on a rampage. They usually head for the nearest town / city which they trash.

Attack, attack, attack they say (at football matches anyway). When you attack a lair, a mini battle screen opens up giving you the opportunity to see how your forces measure up. The graphics are crude by current standards but the game mechanics are well implemented, and there is huge variation in what your spells, creatures, heroes vs the enemy, can achieve. The only thing in my book that might have improved this is some form of initiative – but it works fine as it is. You cast spells up to your mana limit. Some heroes can also cast spells.

A Hero — Serena the Healer 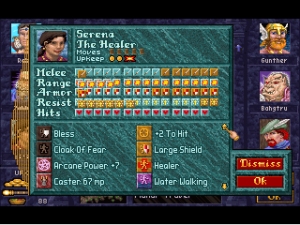 Be aware that although you can mega upgrade your hero, there are still monsters that can take them down and unless you have a resurrect spell, that can be a grave loss. 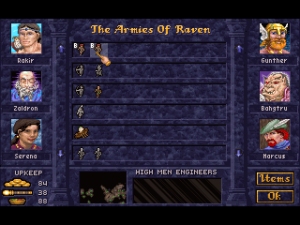 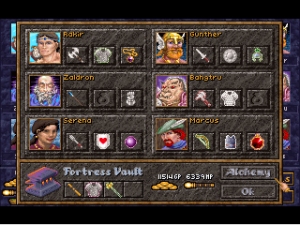 Nodes are the key to magic. Each one you control will generate mana every turn, provided you summon a Magic Spirit and send it to meld with the node. You can also build structures in your towns and cities to generate magic e.g. Shrines generate Mana, Libraries generate Research. The Magic screen lets you allocate between Mana, Research and Skill.

Your casting skill determines how much magic you can cast in one turn (or during each battle). If you’ve got the spells, you can summon creatures such as Sprites, Hell-Hounds and Earth Elementals. Towers are the key to planar travel. They are well guarded. Build up your armies and your battle tactics before assaying one of these.

You just conquered a city but you suspect the beings populating it will be too much trouble, or it’s sited in a bad place. Now’s the time to raze it. If you don’t, your empire will have many races and some just don’t get on — but you also get their special units.

The Cities of Raven

Otherwise, the key to building your empire is founding new colonies via your settlers. Each city can be managed independently

or you can let the Grand Vizier do the lot.

Your playing style is up to you.

Eventually you gain mastery of all you see. Do you let your rivals live on, while you seek out the secrets of Arcanus and Myrror?

Like all games, Master of Magic can be ‘gamed’. There is a project to fix the idiosyncrasies of the game and rebalance the units. One that springs to mind is the highest level unit for High Men – Paladins. Paladin immunity to magic could be said to make them too uber. Magic immunity can be worked around but AI battle tactics tend to involve hammering Paladins with pointless magic attacks. It’s easier to nerf the paladin Rather than fix the AI (which is tricky). But hey! the pre-requisite structures needed to make Paladins i.e. the build-tree, takes some effort getting to — so nerfing Paladins isn’t a big deal to me.

Master of Magic was originally developed by Simtex. In many way it hasn’t been bettered. Subsequent offerings have resurrected aspects of its gameplay including: Heroes of Might and Magic, King’s Bounty, and (in particular) the Civilisation IV mod: Fall from Heaven. The original is still out there. Should you acquire it, I’d strongly recommended the manual and, if you can get it, the official strategy guide which was done by Prima.

Yes it’s a timesink — that’s what games are!

My version runs under DOSbox 0.63 in an XP environment.

Board games, US Comic books, SF Paperbacks, Vinyl records; I've plenty of them all. I write SF (the serious sort). I also do spreadsheets.
View all posts by Terence Park →
This entry was posted in Review, Trivia and tagged Arcanus, Gaming Nostalgia, Master of Magic, Myrror, PC Games, Simtex, Turn based strategy. Bookmark the permalink.