This morning, I was certain that chrome on my PC had been infected by a virus; after a bit of digging, I realised that Google had done their usual: we’ve decided to change the interface and we’re sure you’ll like it but we won’t warn you.  Of course this sent my bile and spleen emitters into overdrive. Eventually I figured that this new retrograde-look is actually by design. The hate and bile was building up, to exhaust it I decided to see how  the slightly new Chrome performed. A simple test beckoned.
For quite some time, I’ve been under the impression that Philip K Dick’s middle name was spelt ‘Kendred’. Heaven knows where I picked this up from. It’s possible I’d seen it misspelt in one of my books. I’ve over 30 books by Dick and at least a further 50 short story collections that might contain the culprit spelling. Did I feel like digging these out (from a library of over 2,000 books). Mmm, not really. And even if I did, I’m not about to pick up his books just to find out; I might end up rereading them!
The net can be useful for many things including tracking down unusual spellings. A quick search, that’s all I needed. This was of course a fatal move. I came across three interesting looking articles on the New York Times Opinionator Blogs, and saw too much reverence for a Great and Holy Man. ‘Ugh’, I thought, ‘the record needs to be put a little straighter….’

Dick was no guru, neither was he a snotty nosed rookie. He lived the dream of drugs and paid the price with his friends.
There were three phases to his career. First was his classic phase, when pretty much all of his output didn’t steer too far from those long ago tenets of Golden Age Science Fiction. He, like others went through the hands of John W Campbell’s Analog, which up to a point shackled his ship. During this time he realised that mainstream American fiction wasn’t ready for him.
During his literary phase, which approximates to his 60’s output, he shoe-horned his talent into the genre. It’s worth bearing in mind that at that time he was a voice crying in the wilderness; no-one paid much attention to SF. Sure there was Dune and Stranger in a Strange Land but they were exceptions. Contemporaries like Brian Aldiss, John Brunner, Ursula LeGuin and Michael Moorcock sang his praises…
but he lived in the real world; this meant doing deals with publishers like Ace Books. Some gave him a helping hand (e.g. Bob Heinlein).
Most of my editions are from that time.
Time.
Perhaps in time this might have made a difference to his circumstances. It was time he didn’t have.
His final phase in the 70’s, is an interesting subject for debate. Dick describes himself watching himself. Recursive observation. This makes sense at the level of a [Platonic] perfect form. Calling those works religious, as some do, pigeon-holes them quite poorly. I’d call it Observer SF, with Dick as the protagonist. Little of it is published (which is fine in my book – my thirty something books of his work are sufficient for me). Dick acknowledged the damage done to him and to those about him by drugs.
The world moves on. It didn’t get Dick when he was alive, yet it is changing; in ways that I recognise.

This… is becoming The World Dick Made. 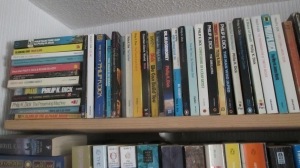 All paperback. Front covers another time. Titles ring any bells?

Those familiar with Dick will find little new here apart from a blooper 3 minutes in, where Michael Sheen says:

‘…influential like Blade Runner, which was based on a short story of Philip K Dick’s called ‘Do Androids Dream of Electric Sheep?’…

which of course was a novel.

btw, I need a motto: Never look for info about a favourite author.